As for the trafMon probe, the collector is a C program that can be conditionally compiled with an embedded Net-SNMP custom sub-agent.

The central collector is continuously fed in near real time via reception/acknowledgement of different types of probe PDU, transporting raw observations on monitored traffic. Note that it is possible to implement a resilient system, where more than one collector are running at different “central” locations. In this case, the probes send their observations PDU packets separately to every collector instances.

The online reception of observations PDU serves a dual purpose:

For this second role, in absence of traffic, the probes regularly send empty heartbeat PDU’s. In classical deployment scenarios, where the TrafMon PDUs are mixed with the observed traffic, this permits to generate useful unavailability event notifications. 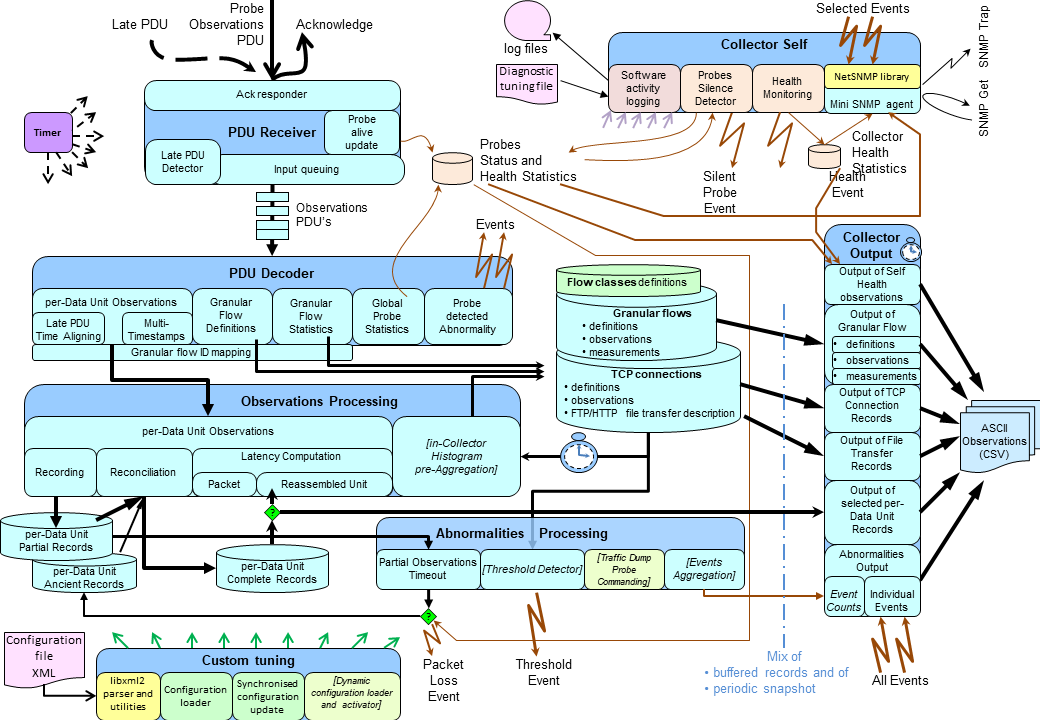 Note however that the description of discovered flow instances, and the slices of measurements data are produced only once by a probe run, then referred to by simple identifiers. This information is kept in the memory space of the collector. Hence it must always start before the probes, although some mechanism attempts to circumvent this issue.

There is however a special case where the collector plays a more important role: the precise measurement of one traffic by a combination of more than one probe. This case has undergone a careful implementation due to a specific context of use in the past.

The objective was to measure a series of low rate data flows of different priorities, some of which being real-time and suffering no latency lag in their long distance travel: time type of safety-of-life stringent requirements that you could impose to remote surgery communications. The probe PDU data were themselves considered low priority, hence the fully controlled, in size and rate, and reliable delivery protocol. Furthermore, partial observations of every packet had be encoded in the most compact way as to take occupy less than 1 % of the observed traffic.

When the collector receives a partial record about a packet MD5 hash, it stores the timestamps for this particular network hop. When the hop list is filled with timestamps reported by all probe on the packet travel path, the record is completed:

After a certained timeout derived from the maximum travel time over the network, partial records are processed and cleaned:

Remarkable events are output, together with the events from the probes, as special kind of observations to be kept with the measurements for correct interpretation.

As for the probes, when compiled with its embedded Net-SNMP sub-agent, the collector can also forward its own events as SNMP notifications. Furthermore, this sub-agent implements a custom read-only MIB permitting a network manager to monitor the behaviour of the distributed trafMon online components.